181-The Power of a Plant: Stephen Ritz and His Incredible Green Bronx Machine 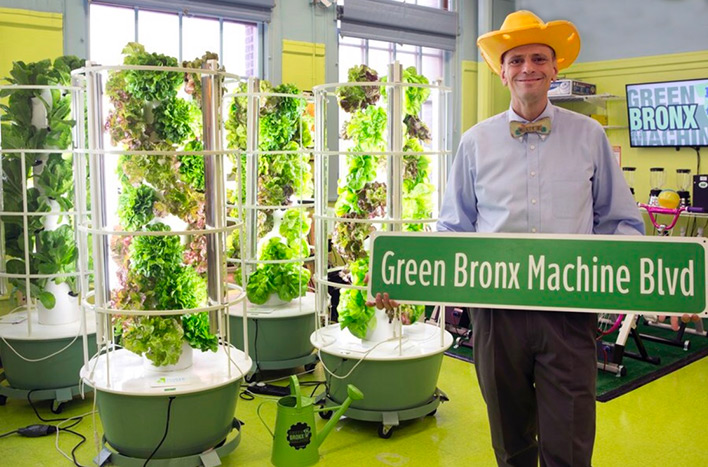 Gardeners know that eating food you grew yourself raises your spirits in a way that few things can. My guest this week, educator and author of The Power of a Plant, Stephen Ritz, recognized the benefit of growing edible plants to enrich students’ bodies and minds in a variety of ways, and his Green Bronx Machine has now inspired a documentary on the far-reaching benefits of raising and sharing nutritious food.

Stephen is a visionary in the urban farming movement. He identifies himself as the CEO — chief eternal optimist, that is — of Bronx County and the founder of Green Bronx Machine, a nonprofit organization dedicated to improving the lives of inner-city youth through gardening in the classroom. 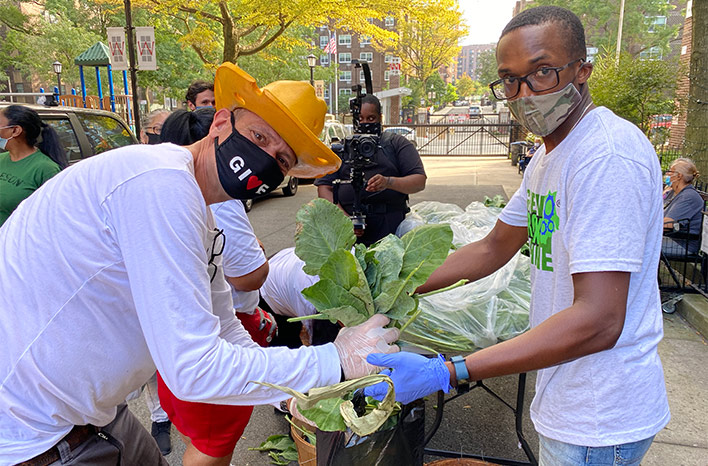 Stephen Ritz’s Green Bronz Machine is dedicated to improving the lives of inner-city youth through gardening in the classroom.  (photo: Courtesy of Stephen Ritz)

Stephen and Green Bronx Machine were the subjects of an Emmy-winning episode of my public television program “Growing a Greener World” and are now featured in the new documentary “Generation Growth,” which recently debuted in Indiana’s Heartland Film Festival. Stephen is also the author of two books that share his philosophy and keys to success in helping children, “The Power of a Plant: A Teacher’s Odyssey to Grow Healthy Minds and Schools” and “Make It Happen!: Stephen Ritz, Urban Farmer.”

One of Stephen’s favorite mantras is, “No one can do everything, but everyone can do something.” Stephen, along with his wife, Lizette, and daughter, Michaela, give so much of themselves to helping others.

Stephen says he was an “accidental teacher.” He came to teaching and urban gardening with no science background and no agricultural background. So when he was called upon to teach science in the same South Bronx neighborhood where he was born and raised, he looked for creative ways to engage students.

In response to his calls for help, he was sent what he thought was a box of onions — and he had no idea what to do with them or what use they could be. He threw the box behind a radiator near a window in his classroom and forgot all about it. Fast forward eight weeks later, and a fight in his classroom is about to turn physical when a student reached behind the radiator and pulled out flowers.

Those “onions” were daffodil bulbs that grew in response to the heat, steam and sunlight around the radiator, and inside the box was a letter inviting his class to plant the bulbs for “It’s My Park Day.” Stephen learned what it means to “force bulbs” indoors, but the greater lesson that came from that incident was how flowers could de-escalate a bad situation and get students excited about school.

What began with an accidental discovery set Stephen on a path to establishing ornamental gardens with students and, later, edible schools gardens both outdoors and in classrooms. The food that students help grow is served in the school cafeteria and sent home to be shared with their families.

At the start, Stephen was working with troubled 18-to-21-year-olds who needed more credits to graduate from high school. Now, he works predominantly with elementary school children. He says starting children on a trajectory of good health and good academic performance from a young age leads to great outcomes.

The Power of a Plant

When students see a seed grow into something great, it becomes an analogy for their own lives, Stephen says. Growth can’t be rushed — there needs to be care and cultivation in the middle before a seed reaches its full potential.

Students’ attitudes toward their food and toward themselves change when they go from bottom-end consumers of food to top-end producers, according to Stephen. Many students often came to school having had chips and soda for breakfast, or nothing to eat at all, and mood, focus and success were negatively affected. When fresh greens were introduced to their diets, they had better academic outcomes.

Stephen says that while many refer to his South Bronx community as a “food desert,” he refers to it as a “food swamp.” Fast food restaurants selling calorie-rich processed food have displaced mom-and-pop businesses that sell fresh meat, fish, fruit and vegetables.

Eating what his students were eating — the food that was available locally — Stephen himself gained weight and became diabetic. When he started growing food in school, that was a game-changer for himself and his students. He lost 110 pounds and turned his health around, and his students had better attendance and graduation rates and fewer behavioral incidents.

Stephen has found that a healthy diet can change so much for a child, and he sees children in marginalized communities as a wealth of untapped potential. As he puts it, “It’s breakfast, not birthplace, it’s lunch, not lineage, it’s dinner, not DNA, that allow you to express your disease potential or your health potential.”

Stephen’s school, C.S. 55, now has one of the preeminent school gardens and school café programs, and through the years, it’s gone from “developing,” to “proficient,” to exceeding city and state standards for academic success.

Green Bronx Machine’s outreach has grown and now gives to food pantries and seniors in the community. 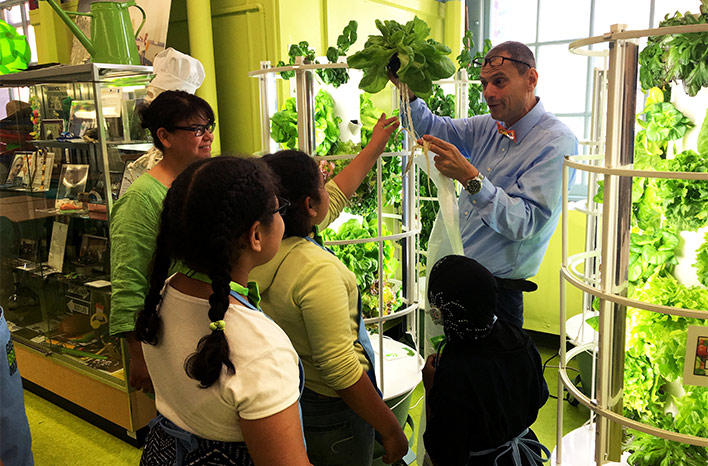 Stephen’s school, C.S. 55, now has one of the preeminent school gardens and school café programs. (photo: Courtesy of Stephen Ritz)

Green Bronx Machine in the Pandemic

Early in the pandemic, Stephen was able to get into the empty school building to care for the growing vegetables and distribute them. However, word finally came that he had to clear out, so he took the classroom Tower Gardens to his family’s home and has been growing there ever since.

Once restaurants closed and there was food with no place to go, Stephen helped created the Sustainable Gangsters Campaign, to buy that food for pennies on the dollar and distribute it in the community. Food that otherwise would have ended up in landfills was rescued at peak freshness and distributed to children and seniors.

“Sustainable Gangster” T-shirts made locally were sold as a fundraiser, and for every shirt purchased the campaign bought a family a bag of groceries. A second T-shirt campaign in response to high-profile deaths in 2020 that shook the nation uses the slogan “Education, Not Asphyxiation,” and for each shirt sold a child in need receives a new backpack complete with a notebook, markers, pens, crayons, a highlighter, hand sanitizer and a mask. 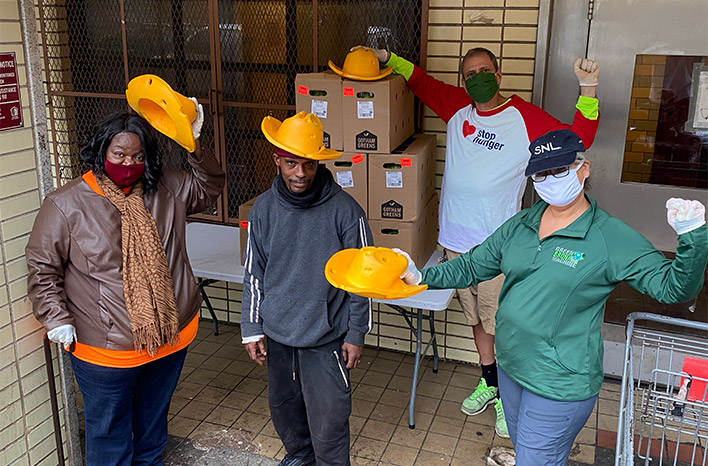 When restaurants closed during the pandemic, there was food with no place to go. Stephen helped created the Sustainable Gangsters Campaign to buy that food for pennies on the dollar and distribute it in the community. (photo: Courtesy of Stephen Ritz)

Stephen earned a Ph.D. based on his classroom gardening curriculum, and the Green Bronx Machine model has been adopted at schools across the United States. But Stephen’s efforts didn’t stop there.

Stephen’s nonprofit helped build the first wheelchair-accessible commercial farm in the U.S. and the first foster care farm in Appalachia, in a district that has the lowest graduation rate and the highest incarceration rate for high school students who are in the foster care system.

His latest project is to provide WiFi in community gardens so students without home internet can participate in remote learning in a green space. 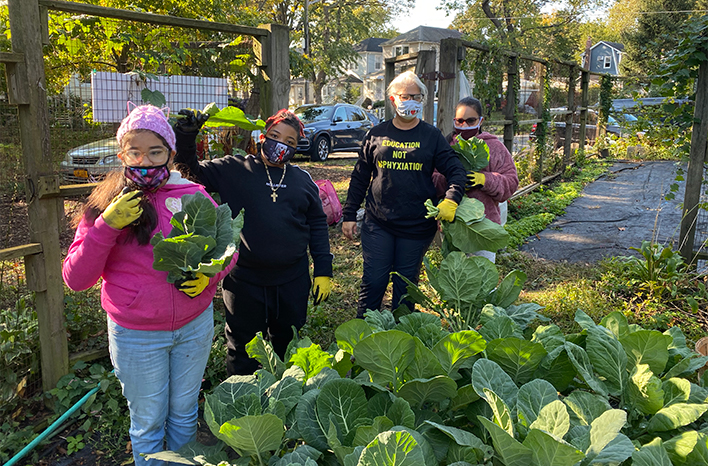 The influence and impact of Stephen and the Green Bronx Machine extends far beyond the classroom. (photo: Courtesy of Stephen Ritz)

If you haven’t listened to my conversation with Stephen Ritz yet, you can do so by scrolling up the page and hitting the play button in the green bar.

Does your community have a school gardening program? Let us know in the comments below.

Some product links in this guide are affiliate links. See full disclosure below.

Episode 127: Top Takeaways for Gardeners from 10 Years of Growing a Greener World

“The Power of a Plant: A Teacher’s Odyssey to Grow Healthy Minds and Schools” by Stephen Ritz

Exmark – Our podcast episode sponsor and Brand Partner of joegardener.com

0 Responses to “181-The Power of a Plant: Stephen Ritz and His Incredible Green Bronx Machine”