052-Why Organic Matters – with Maria Rodale 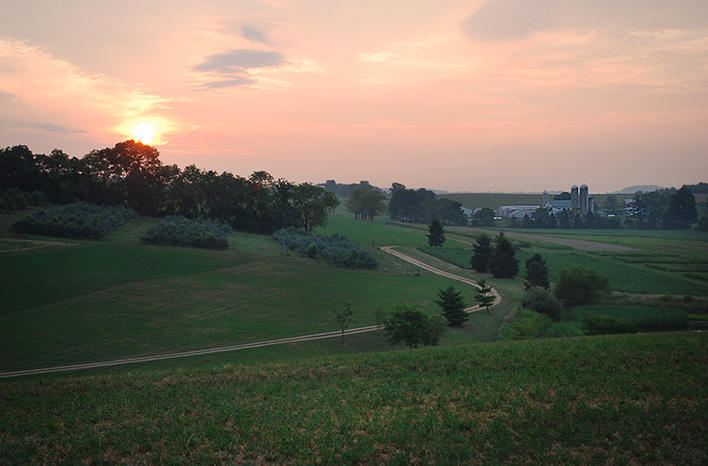 In this week’s episode, I revisit a conversation with one of my hero’s – Maria Rodale, on why organic matters. Maria is a lifelong advocate of organic farming and gardening and is third generation in a legacy of commitment to organic agricultural practices. Although her family is now iconic in the world of health and wellness, their legacy was born out of a simple, yet passionate, belief that Healthy Soil = Healthy Food = Healthy People.

Although you might be familiar with the name Rodale, you might not know the full extent of their achievements. Rodale Inc. is a global health and wellness publishing company. It produces some of the most recognized health and wellness magazines; including Men’s Health, Women’s Health, Prevention, Runner’s World, Bicycling, and Rodale’s Organic Life. The Rodale Institute™ is located in Kutztown, PA and is a leading organic agricultural research and education non-profit organization – with Maria Rodale at the helm as Co-chairman. 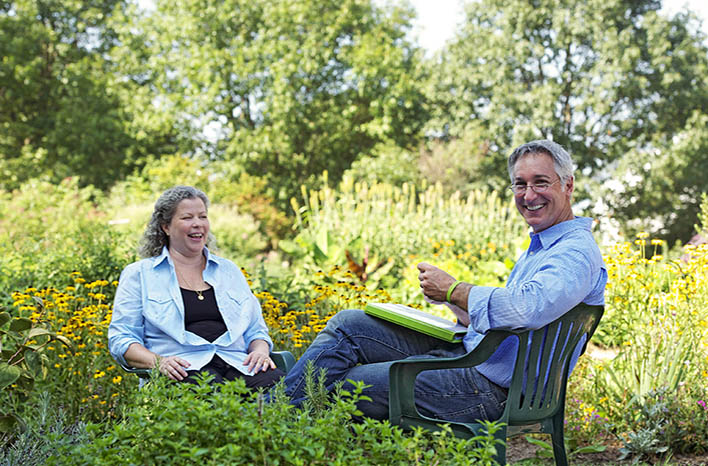 A lighter moment during my 2010 Growing a Greener World interview with Maria Rodale, author and lifelong advocate of organic farming and gardening.

Maria is also a prolific author, and her book Organic Manifesto – How organic farming can heal our planet, feed the world, and keep us safe is a hands-down favorite of mine. The first time I read it, I was captivated, and it’s poignant message still reverberates in everything I do.

The History of the Rodale Legacy

The Rodale Institute was founded by Maria’s grandfather, J.I. Rodale. As World War II took hold in Europe, J.I. was drawn to writings of a group of British intellectuals who were traveling and sharing their international exploration of the relationship between nature and farming. Their findings inspired J.I. to bring an organic mindset to the United States and launch Organic Farming and Gardening magazine in 1942.

The phrase “grow organic” is a common refrain today, but that wasn’t always the case. During the late 1930’s and early 1940’s, J.I.’s organic principles were considered objectionable, unscientific and unpatriotic. He was strongly ridiculed for his organic message.

Although there were already instances of the negative health consequences of agricultural chemicals – children were dying of lead poisoning after eating apples grown in orchards using lead arsenic – synthetic chemicals were seen as the patriotic wave of the future.

Out of a determination to prove the naysayers wrong, Maria’s father – Robert Rodale – began the Rodale Institute’s comparison study. With involvement of the few scientific minds willing to participate, Robert grew organic and synthetic crops in side-by-side fields to demonstrate and prove the viability of organic principles. After 40 years, this study is still going strong and is the longest running of its kind. 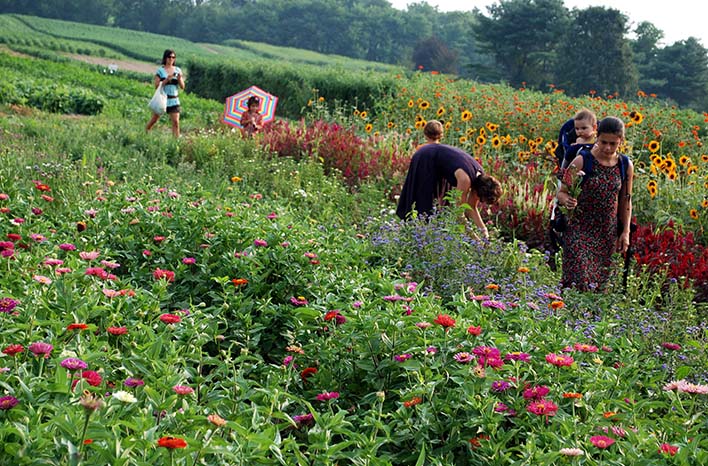 The Rodale Institute is open to the public to view demonstrations and purchase organically-raised products.

In 2010, the Growing a Greener World® crew and I visited the Rodale Institute to film an episode for the show. We were taken aback by the notable differences between crops grown organically and synthetically.

Healthy soil is better able to hold moisture – even in dry spells. So, the crop grown in organically-fed soil has access to moisture and nutrients held within that fertile soil itself and is able to maintain healthy growth and production. 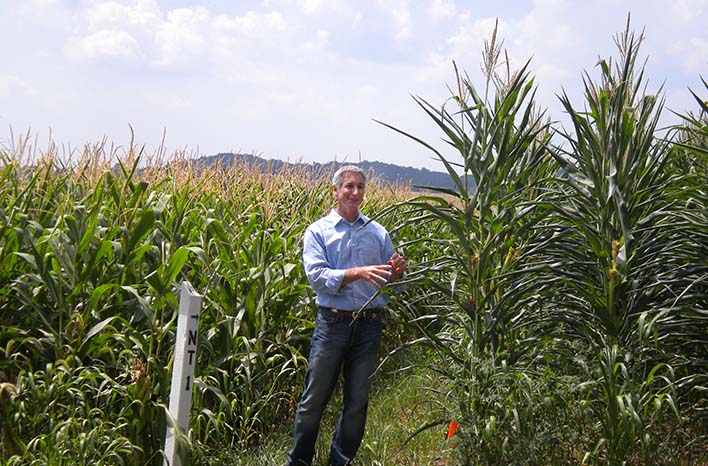 You can see here how much taller the organically-grown corn was than the synthetically-grown corn. This image was taken during a drier season at the Rodale Institute and demonstrates that plants are better able to thrive during times of stress when they are grown in organic soil.

The Business of Chemicals in Our Food

In researching her book, Organic Manifesto, Maria met with many farmers using synthetic chemicals, so she could better understand their needs and motivations. She learned that the synthetic chemical trade has a seminal reach into the modern farming mindset.

The infrastructure of chemical companies’ influence is pervasive in the education of the farmer – from early days spent in 4-H clubs, participation in Future Farmers of America, and on through college education and farm management. After all – chemical companies own, sponsor or manage the 4-H, Future Farmers of America, the Farm Bureau, and many agricultural co-ops. They also fund the research being done by farming students in universities across the country.

Many farmers consider their chemical supplier to be their most trusted source of information. It’s no wonder – the message that chemicals are necessary to compete and succeed has been integral throughout their life in agriculture. It’s a tangled financial and psychological web.

But how trustworthy is information when it comes from a source with a vested interest in those abiding by that advice? In other industries, this is a recognized conflict of interest.

All this is certainly not to knock the farmer – these chemically-financed programs and institutions are a farmer’s bread and butter, and they play an enormous role in whether a farmer succeeds or fails.

Often, farmers are in the grip of a synthetic cycle. Their existing debt, their farming peers and the Farm Bureau itself all hold a farmer fast in maintaining synthetic practices. The Farm Bill was written to benefit chemical companies – not the farmer. Many farmers disagree with some of the bill’s requirements and would prefer not to be beholden to those subsidies, if given the option.

Farming is a difficult business. Farmers certainly aren’t “in it for the money” – they do it for the love of their work. The unfortunate truth is that they have little choice but to be driven by the industry as a whole – just to survive. 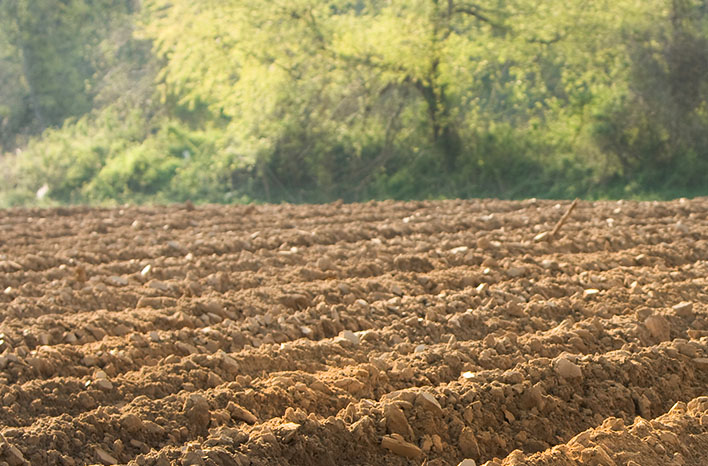 The message that chemicals are necessary for a farmer to compete and succeed is pervasive – from a childhood spent in 4-H clubs and on throughout agricultural education programs.

Rodale Institute studies have shown that organic agricultural practices are more reliable and more productive during inclement conditions. In short, those organically-grown plants do better. We all love healthy plants and good crops, but there’s much more at stake here.

In preparing for her book, Maria expected to find that the primary benefit of growing organically would be increased nutritional value in the food produced. She quickly discovered that there was a more urgent message.

Reliable and well-respected independent studies have proven that the chemicals used throughout all aspects of agriculture – from pest management to fertilization – are direct causes of diseases like diabetes, autism, infertility, ADHD, and cancer. It’s been documented that pesticides cause childhood leukemia, and that GMO’s (Genetically-Modified Organisms – genetically-modified plants) cause organ failure and accelerate human aging.

Roundup (glyphosate) is the most widely-used herbicide in the world – in spite of recognized proof that it causes birth defects.

Think you can protect yourself by just giving those non-organic fruits and veggies a good wash or peeling off their skins? The problem goes deeper than you may realize.

Consider this example: A few decades ago, it wasn’t uncommon to find the pesticide Aldicarb in commercially-available watermelon. Anyone eating watermelon treated with Aldicarb was also consuming the chemicals – and getting sick. At the time of this podcast recording, Aldicarb was considered dangerous and slated to be phased out by 2015, but it’s making a comeback. The agriculture industry is re-incorporating this known poison into their food-growing operations. 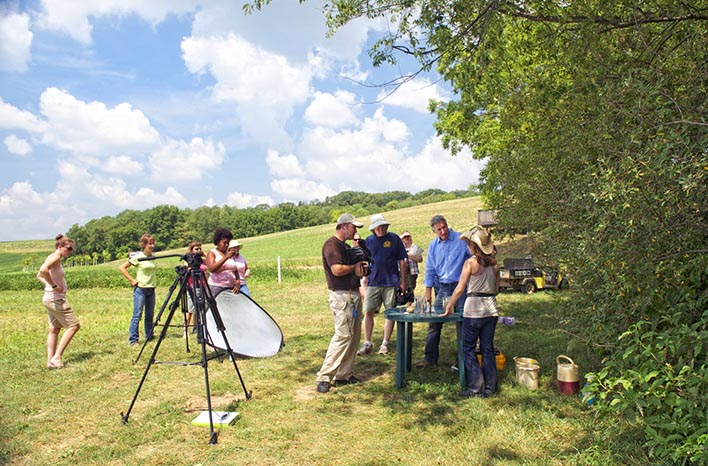 During the filming of our Growing a Greener World episode; Maria’s daughter, Maya Rodale demonstrated the notable differences in soil samples from organic and synthetic practices.

I believe we all want to make good choices. Most people – including you, probably – feel it’s important to be a good environmental steward. But many of us don’t follow that belief on through our actions. If you grow your own food, that’s a good start. If you garden organically, that’s even better.

But where we can all really have an impact is in our spending. That can be a tough pill to swallow. Buying organic is more expensive – no two ways about it. When we live within our budgets, our choices shift from the philosophical to the practical. Also, you might feel that you don’t have much impact on your own, but make no mistake – there are many eyes watching how you spend.

Businesses – from every industry – track the money. It’s the nature of remaining competitive. All industries measure every purchase that is made within their market – and so do government agencies. They all want to understand what the consumer is doing, so they can anticipate and make the most of buying trends.

Those trends become investments, and those investments eventually become the money which funds the farmer.

This is a time-tested economic principle: If we collectively demand organic products, investments will shift to organic practices to meet that demand, and increased organic supply means lowered organic cost.

Purchasing items carrying the USDA Certified Organic label can change the agricultural industry as a whole. When you buy a product that is either a synthetically-produced GMO or is USDA Certified Organic, someone somewhere is taking note. Your purchase is a vote – a tick on the box of demand. Everything we do matters.

There was so much more I wanted to discuss with Maria Rodale during our Growing a Greener World filming that I invited her to join me and continue our talk in this 2010 podcast. Maria is a wealth of knowledge, and her book – Organic Manifesto – is a must-read.

You may not know this, but I didn’t always garden or purchase organically. Early on in my gardening career synthetic fertilizers, pesticides and herbicides weren’t an uncommon site on my property. As I learned more about the negative impacts of synthetics – and observed some myself – my thinking changed. I became an organic gardener step-by-step, making incremental changes that snowballed – because I was so inspired and excited by the results organic methods produced. Even if you only begin with a change or two, those efforts will have an impact.

My purchasing habits changed too, and I’ve never been one to spend money unnecessarily or unwisely. I now see my organic purchases as an investment in my health, the health of my family and the health of the world around me.

If you haven’t read Organic Manifesto, find a copy and transform your thinking. If you haven’t already listened to this podcast recording, may I suggest that you scroll to the beginning of these notes and listen now? My conversation with Maria is as relevant and informational today as it was when we first spoke in 2010. And near the close, I share some of the powerful words straight from her book. I hope you enjoy.

Organic Manifesto – How organic farming can heal our planet, feed the world, and keep us safe

Clemson University: Aldicarb coming back to the agricultural pesticide mix

Joe Lamp’l is the creator and “joe” behind joe gardener®. His lifetime passion and devotion to all things horticulture has led him to a long-time career as one of the country’s most recognized and trusted personalities in organic gardening and sustainability. That is most evident in his role as host and creator of Growing a Greener World®, a national green-living lifestyle series on PBS currently in production of its ninth season. When he’s not working in his large, raised bed vegetable garden, he’s likely planting or digging something up, or spending time with his family on their organic farm, just north of Atlanta, GA. 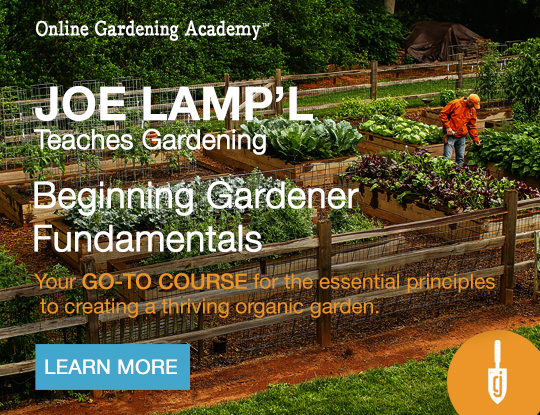