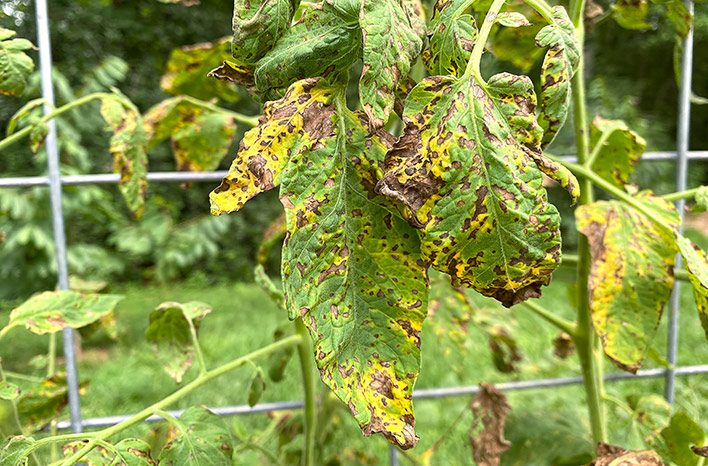 Plant diseases pose one of the biggest challenges that gardeners face, and while it can be tempting to reach for a chemical control, managing plant diseases organically is possible. To speak to that fact, I invited Dr. Jeff Gillman on the podcast a couple of years back, and I am revisiting that conversion this week because now is that time of summer when plant diseases show themselves in a garden that otherwise appeared healthy up until this point.

Jeff holds both a master’s degree in entomology and a Ph.D. in horticulture and has authored five books on gardening and the environment. He originally hails from a small town in Pennsylvania just west of Philadelphia and today is the director of the University of North Carolina Charlotte Botanical Gardens. He’s also a former associate professor in the department of horticultural science at the University of Minnesota. 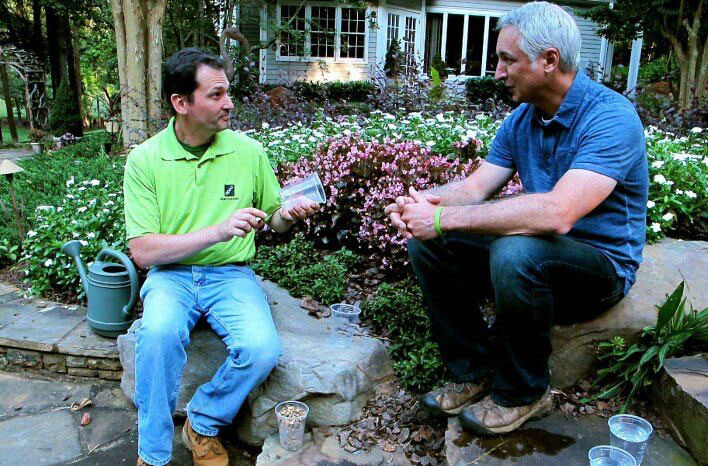 Jeff Gillman, Ph.D dishes out the details on organic disease control with Joe Lamp’l during the taping of an episode of Growing a Greener World.

Jeff says the biggest issue for gardeners trying to prevent plant diseases is watering. Watering too much or too little can lead to disease problems, but where we water is just as important. Jeff points out that, while it varies disease to disease, in most cases it is best to avoid watering the leaves of a plant. That’s because wet leaves give fungus a place to take hold. But there is a significant exception, and that’s powdery mildew. Water can, in fact, help control powdery mildew. However, Jeff warns that there are many diseases that are worse than powdery mildew, so keep that hose at bay. Rather, he recommends spraying leaves with a mixture of one part milk and two parts water, once every week or two, as a preventive. (Both liquid milk and powdered milk will work.) Jeff uses the mixture most often on roses, where it can also control black spot.

While water sitting on leaves is the enemy, air flowing between leaves is your friend. Wherever air stagnates, diseases can take hold, Jeff says. This is why seeds and seedlings come with instructions for spacing between plants, and one of the reasons why suckers are removed from tomato plants.

If a diseased plant is in your garden, Jeff says don’t wait — get it out of there! The longer it is there, the longer it is spreading spores to soil and other plants. In a vegetable garden, if part of a plant is showing disease and the rest seems okay, Jeff still recommends removing the whole plant. However, if the plant is about to produce fruit, you can give it more time, pick the fruit, and then remove the whole plant — the sooner the better. When it comes to trees, identifying the disease and learning whether it is possible to prune it out is key. If a disease is systemic and pruning will not help, removing the whole tree is the right solution. 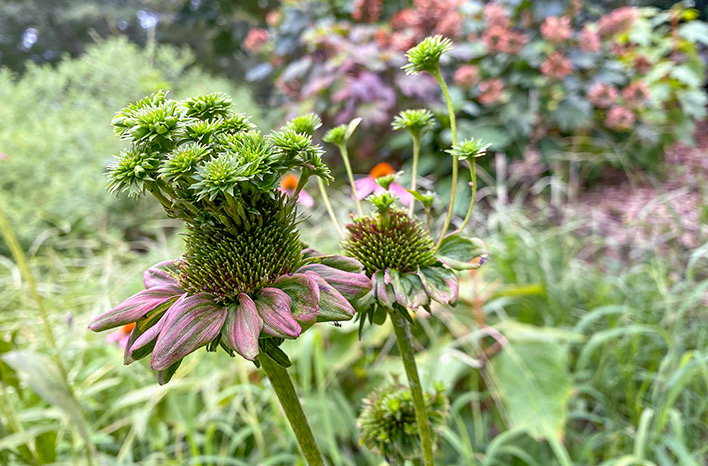 These flowers have been stricken with a viral-like disease called aster yellows. This is caused by a phytoplasma and is spread by insects that suck the sap of plants, such as the aster leafhopper. Removing infected plants from the garden is the best way to minimize spread.

Diseases can persist in the soil for several years. That’s why crop rotation is an effective organic gardening practice for managing plant diseases. Changing what’s planted in a certain spot in the garden from year to year will reduce the fungal diseases in the soil by denying them their preferred host plants. If tomatoes grown in one corner or bed of your garden are affected by disease, then next summer (and ideally,  for four consecutive seasons) avoid planting tomatoes or another vegetable in the nightshade family — like peppers and eggplants — in that same place. Instead, plant carrots or lettuce, which won’t be affected by nightshade diseases. Most diseases won’t infect a wide variety of plants, Jeff points out, but he notes that powdery mildew will infect just about everything.

To clear a soil-borne disease out rapidly, there’s solarization. This is the process of putting a clear plastic sheet out over an area of land for at least two weeks — preferably longer — to get the heat to collect under the plastic and kill the bad microbes. When the plastic comes off, good microbes will move in.

Jeff says that when it comes to chemical disease control, some products are safer than others. Some are even approved for organic gardening. Sulfur, for instance, is not one of the most effective controls, Jeff says, but it is one of the safest controls out there. It’s a fungicide, and because sulfur is found in soil anyway, it’s not a big deal if some gets on the soil. And then there is copper, which is found in Bordeaux mixture, a combination of copper sulfate and lime, and other fungicides. Copper can build up in the soil, eventually causing copper toxicity that harms plants. I do use copper in my garden on occasion, but primarily on my tomato plants, which are so susceptible to diseases. I am judicious in how and when I use it, recognizing the fact that copper can build up in the soil.

The biggest takeaway here is that managing plant diseases organically starts with raising vigorous plants, and that means watering right, allowing for plenty of airflow and fertilizing adequately but not overfeeding. Remember to start off with healthy soil amended with plenty of compost that contains beneficial microorganisms, and top off your planting area with mulch to provide a protective barrier between your plant and soil-borne diseases that can splash up. 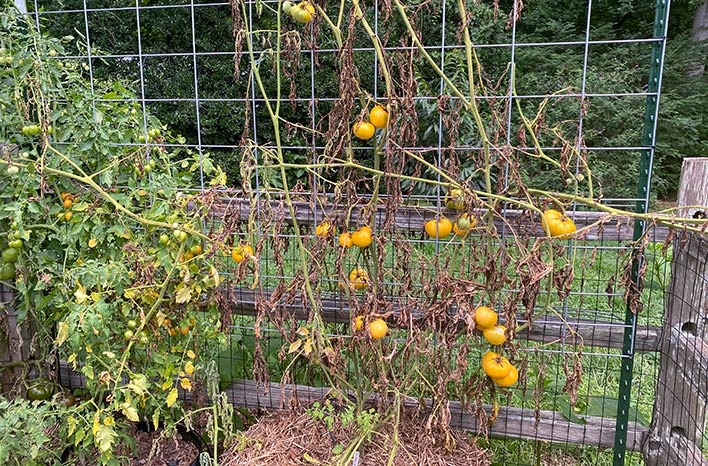 Tomato diseases were so rampant this year that even growing in straw bales — rather than soil — didn’t protect plants from Southern Blight. It can persist in hot, wet, environments, and attacks “aerobic soils”, which can even include the well-aerated tops of a straw bale.

What are your favorite methods for managing plant diseases organically? Share with us in the comments below.

If you haven’t listened to my conversation with Jeff Gillman yet, go ahead and scroll up the page and hit the Play icon on the green bar. And for more on this topic, check out the show notes from the original airing.

Episode 069: The Fascinating Facts Behind the Plants We Eat, with Jeff Gillman

Episode 115: Understanding Tomato Diseases and How to Deal With Them

Episode 162: Plant Disease Fundamentals – Understanding the Basics and Beyond

“The Truth About Organic Gardening: Benefits, Drawbacks, and the Bottom Line” by Jeff Gillman

“The Truth About Garden Remedies: What Works, What Doesn’t, and Why” by Jeff Gillman

“Decoding Gardening Advice: The Science Behind the 100 Most Common Recommendations,” by Jeff Gillman and Meleah Maynard

Park Seed® – Our podcast episode sponsor and Brand Partner of joegardener.com – Use code Joe20 for 20% off your next order