069-The Fascinating Facts Behind the Plants We Eat, with Jeff Gillman 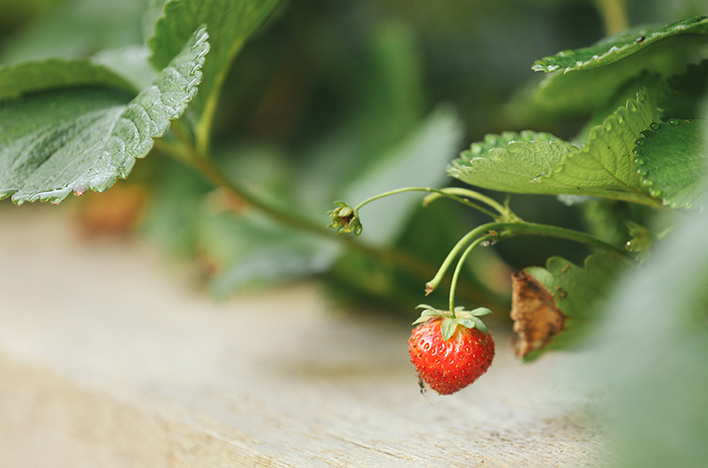 Today’s episode dives into some of the interesting facts of the foods we all eat. My guest, Dr. Jeff Gillman, is Director of the UNC Charlotte Botanical Gardens, and he recently began his own podcast show “The Plants We Eat” which features the unique aspects and history of common garden edibles. We rarely consider, or are even aware, of the stories behind some of the items that we grow in the garden and put on our plates.

As a self-described “plant history enthusiast,” Jeff loves exploring and sharing how plants connect with people and have evolved through the generations. 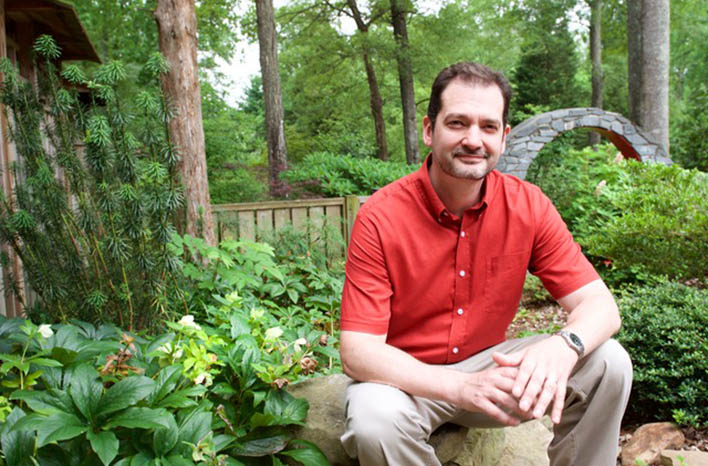 Dr. Jeff Gillman is fascinated by the history behind and little-known facts about our common garden edibles. (photo: Jeff Gillman)

99% of the cropland in the United States is planted with non-native species. Commercially-grown blueberries is an exception. Although they are native to North America, they weren’t cultivated until the early 1900s, when a cranberry farmer took up the challenge.

Elizabeth White read an academic paper written on the then-surprising discovery that blueberry plants required acidic soil for health and berry production. Since her cranberry crop required that soil acidity too, Elizabeth recognized a new opportunity and began to seek out and plant different varieties of blueberries on her property.

A century later, blueberries have become a popular garden edible. They are easy to grow, provide a tasty crop, and their colorful foliage and bloom provide interest all year long.

There are three primary types of blueberry plants – lowbush (native to and commonly grown in the northern part of the U.S.), highbush (producing most commercially-available berries on the market and common to the southern states of the country), and rabbiteye (a smaller berry native to and hardy in the heat and humidity of the southeast). 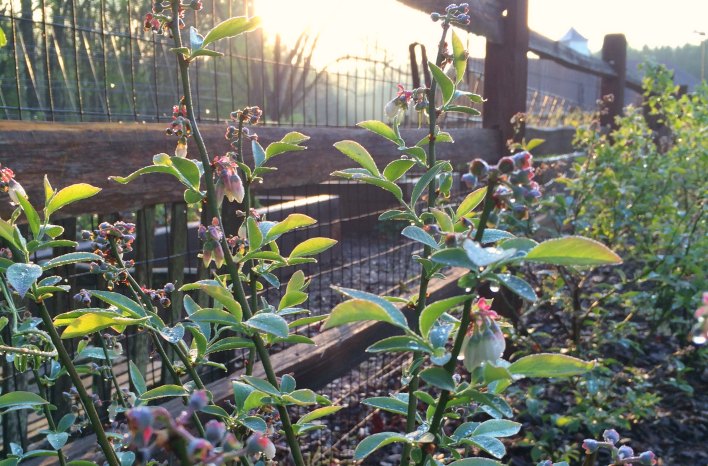 The bell shape of blueberry flowers make them difficult to pollinate. Fortunately, carpenter bees slit open the flower to steal nectar. This provides access to honeybees and other pollinators.

Within each group are a world of varietals, so it is easy to find blueberry plants to fit your needs no matter where you garden. If you add blueberry plants to your landscape, it’s a good idea to start with a soil test to determine whether or not you need to bring down the pH level to the appropriate acidity.

Jeff’s preferred method to acidify soil is adding straight sulfur. It takes a little longer for that amendment to lower the soil pH, but the results last much longer and require fewer applications to maintain acidity over time.

Fortunately for us, blueberries are also very pest and disease resistant. I dove into the topic of blueberries and the few pests which can plague them in an earlier podcast with expert blueberry grower, Dr. Lee Reich.

Jeff shared some interesting facts about blueberry pollination too. The bell-shape of the blossoms makes it difficult for most insects to reach in to the pollen chamber. Carpenter bees solve that problem. They cut away a section of the bloom in order to steal away some of the nectar. If you listen carefully, you can actually hear them slice away the delicate bloom. The pollen doesn’t stick to the carpenter bee, so they aren’t actually performing any pollination work. Yet, it’s the resulting slits in the petal structure which allows honeybees and other pollinators to access the chamber and perform the pollination necessary for fruit set. I plan to be on the lookout for this fascinating activity next season.

The strawberries we grow and purchase at the supermarket are not a native species. They are the result of hybridization engineered by a 17-year-old Frenchman in the 1700s.

During the middle part of that century, a certain French spy was living in Chile surveilling a Spanish foe. While there he enjoyed the Chilean strawberry – a fruit much larger than any he’d seen in Europe. When this spy returned to France, he brought with him six Chilean strawberry plants – unaware he had in his possession only female plants. Strawberries require male and female plants to produce fruit.

It was the young Antoine Duschesne who realized he could cross these female plants with the inherently small native male strawberries. The resulting offspring of his experiment were large, delicious fruit which earned him an audience with the king of France and a place in history as the father of the modern day strawberry. 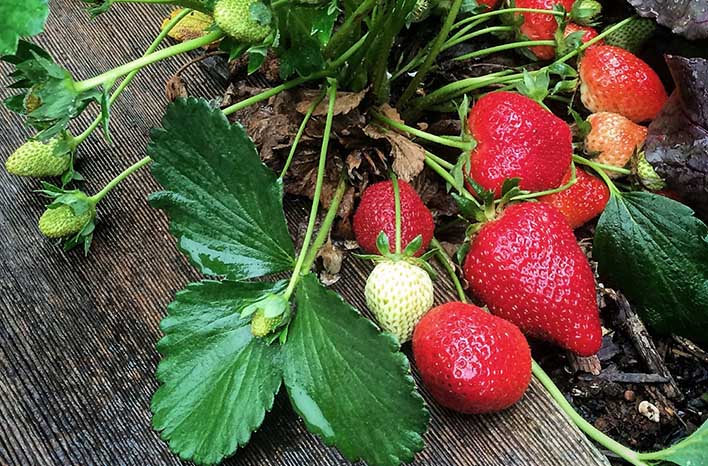 The modern day strawberry is actually a cross between small strawberry plants native to Europe and large Chilean strawberries.

Strawberries are also easy to grow, both in-ground or in containers. There are three primary types – June-bearing, everbearing and day neutral. There are numerous varietals within each group, so there are many to choose from to fit your hardiness zone.

If you’ve grown strawberries, you know they can be very prolific and reproduce easily by sending out runners to create new plants. What you might not know is that the berry itself is unique in that it is one of the few fruits we eat which is actually the receptacle – the area where the tissue connecting the flower to the plant swelled after pollination. This is why the seeds are on the outside “flesh” of the strawberry.

Where would the world be without peanut butter? Did you know it takes 540 peanuts to make a 12-ounce jar? Jeff has done the research, and these are the types of tidbits he shares in his podcast.

From a gardener’s perspective though, peanuts are highly underrated. These legumes are easy to grow, and they are a great nitrogen-fixer to improve soil health. I’ll admit – I’ve never grown peanuts either. In fact, we didn’t even include peanuts as a subject for my first television series – Fresh from the Garden. In that series, each episode covered how to grow and harvest a specific crop, but we never featured peanuts. Watch for peanuts to be showing up at the GardenFarm™ next year! 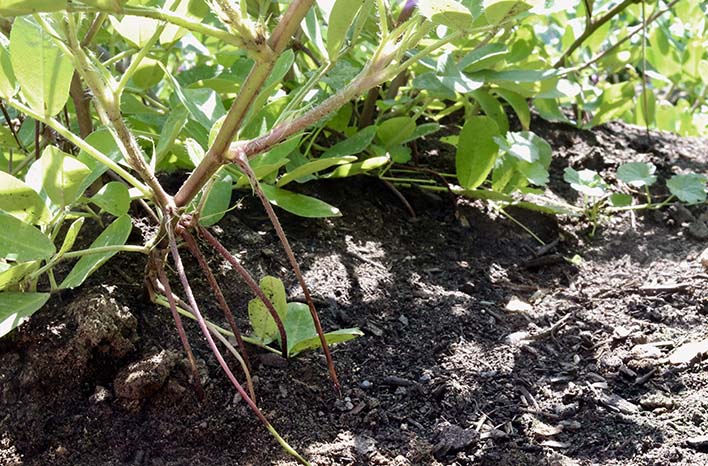 Peanut flowers “peg” into the ground to seed under the soil’s surface. (photo: Meg Cowden)

Peanuts originated in Peru, were brought to Africa, and eventually made their way to America. They were popular only with the southern slaves who brought them – until they were provided as a protein source for hungry Confederate soldiers.

The reason behind this unique behavior is unknown. There is a theory that the plant is protecting its seeds. A second, somewhat offbeat theory, is that the plants – which were originally found growing along streams – were locating their seeds where they were most likely to be caught up by the water and carried to reproduce downstream.

Each flower produces one peanut shell, containing one to three peanuts. The raw peanut is considered anti-nutrient. In other words, once consumed, the raw peanut binds with vitamins in our bodies and prevents those vitamins from being absorbed. However, those anti-nutrient properties dissipate once the peanuts are roasted, boiled or fried. Yes, Jeff reports you can fry peanuts. 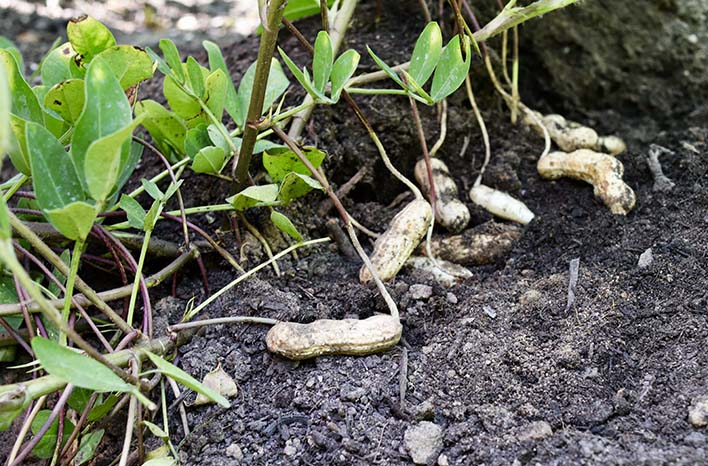 Jeff and I are both big fans of the boiled peanut. He makes them by boiling heavily-salted water in a crockpot and keeping the peanuts at a boil for between 4-8 hours. Some people prefer the “al dente” quality of peanuts boiled for just four hours, while others prefer the softer consistency which comes after they’ve been cooking for eight hours. In either case, you can turn the heat on low at the point you consider them perfect and leave them in the warm water for up to 48 hours.

It’s difficult to find raw peanuts to boil, so I’m looking forward to giving Jeff’s method a try when I grow this crop next year.

Only about 5% of the corn grown in this country is for our eating pleasure. The rest is used for feeding livestock, making ethanol, and other industrial purposes. The sweet corn we enjoy for dinner is actually a genetic mutation of the species.

Also native to South America, corn was brought by native americans to the landscape of what is now the United States. Yet, this indigenous crop is one of the most engineered and hybridized of all the edible plants we grow. Most modern corn varietals have been genetically modified to be more resistant to pests, diseases and the herbicides commonly used in commercial farming.

It’s now a common practice to cross pollinate two different corn types to produce a larger ear. The female plants of one variety will be de-tasseled and, then, pollinated by tassels from the male plants of another variety. The resulting corn is larger than the ears produced by either parent. Interestingly, this larger size comes from just the first generation of cross pollination.

If corn from that larger ear is planted, the corn it produces won’t be as large. So, growers continue to this cross-pollination process season after season.

The sweet corn we eat is actually a genetic mutation of the species. (photo: Meg Cowden)

Corn is a heavy feeder and takes up a lot of nitrogen from the soil. That was particularly true of early corn crops. Modern corn has been carefully bred to be more efficient at taking up that nitrogen, so growers can apply less fertilizer.

In recent years, BT bacteria has been genetically engineered into corn to make it more resistant to corn ear worm and some other caterpillars. Other genetic modifications have made modern corn crops resistant to herbicides, such as Roundup, still commonly applied by commercial growers.

Regardless of how you feel about GMO crops, Jeff points out that it’s these modifications which have made large, commercial food production – necessary to feed our ever-increasing world population – possible.

There are so many more fascinating food facts, and for me, these make my time spent in the garden even more pleasurable. I hope these have piqued your interest too.

If you haven’t already listened to the podcast, you can scroll to the top of the page and click the Play icon in the green bar under the page title. Jeff describes the taste of raw peanuts as well as a little more on his background and why food history has become such a passion in his career. 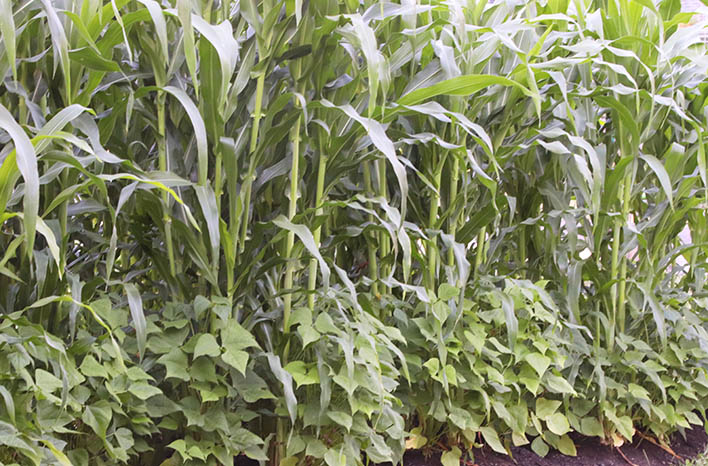 Corn is a heavy feeder – it takes up lots of nitrogen from the surrounding soil. Seen here is a three-sisters planting – with black beans (a nitrogen fixer to fix more of the nutrient in the soil) and pumpkin vine. (photo: Meg Cowden)

The Plants We Eat podcast

The Truth About Organic Gardening : Benefits, Drawbacks, and the Bottom Line, by Dr. Jeff Gillman

How the Government Got in Your Backyard: Superweeds, Frankenfoods, Lawn Wars, and the (Nonpartisian) Truth about Environmental Politics, by Jeff Gillman

Decoding Gardening Advice: The Science Behind the 100 Most Common Recommendations, by Jeff Gillman & Meleah Maynard

The Truth About Garden Remedies: What Works, What Doesn’t, and Why, by Jeff Gillman