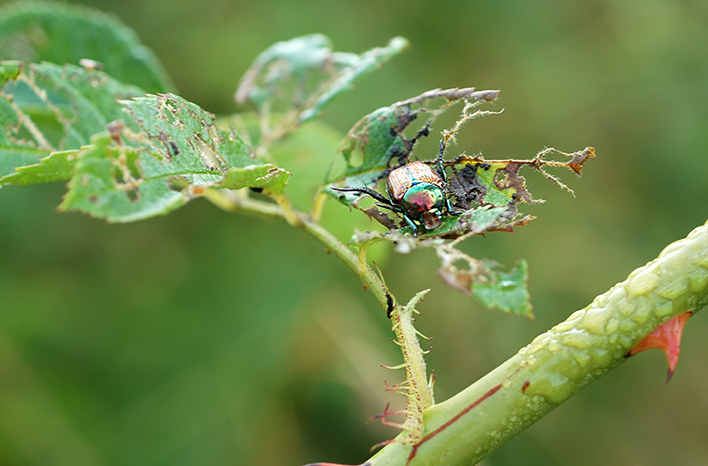 Japanese beetle prevention and control is one of the most common challenges for gardeners each summer. Although they are one of the most visually stunning insects, with their bronze and green coloring, these invasive pests are also one of the most destructive — they damage and can sometimes even kill flowers, shrubs and trees when they are not controlled.

It’s thought that Japanese beetles first arrived in the United States with a shipment of iris bulbs from Japan in 1916. Unfortunately, their natural predators did not make the journey with them to North America, where they now proliferate nearly unabated in lieu of human intervention.

Japanese beetles are a nuisance both in their larval and adult stages and affect more than 300 types of plants and trees. 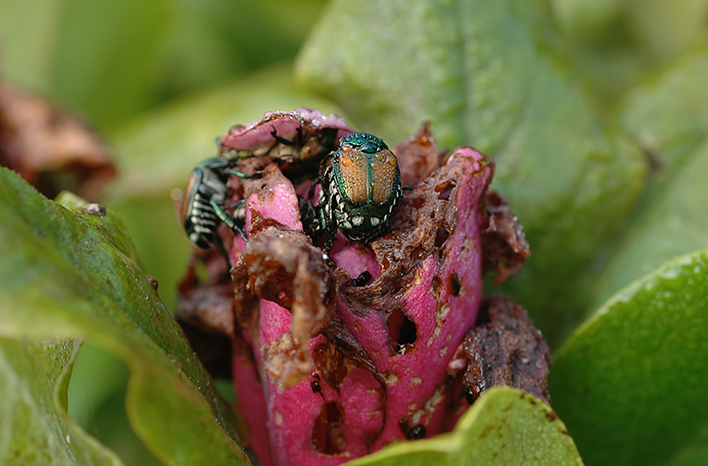 Japanese beetles prey on flower buds as well as leaves.

Identifying Japanese Beetles and Their Damage

An adult Japanese beetle is about 3/8th of an inch long. It’s distinct wing covers appear metallic — like copper with green fluorescence — while its abdomen has five tufts of white hair on each side. A Japanese beetle larva is a white grub that grows to an inch long. Grubs are found in the soil, often under lawns, in a curled position.

You may see the damage that Japanese beetles cause before you find a beetle or a grub.

Above ground, where Japanese beetle damage is more apparent, the adults skeletonize leaves between the veins. The foliage that remains looks similar to lace. But the beetles don’t stop there — they also eat flowers.

Grub damage becomes apparent when dead patches appear in lawns and golf greens. The patches of dead turfgrass can be picked up like pieces of loose carpet. While there may be other causes for a lawn to die like this, Japanese beetles are rightfully one of the usual suspects. 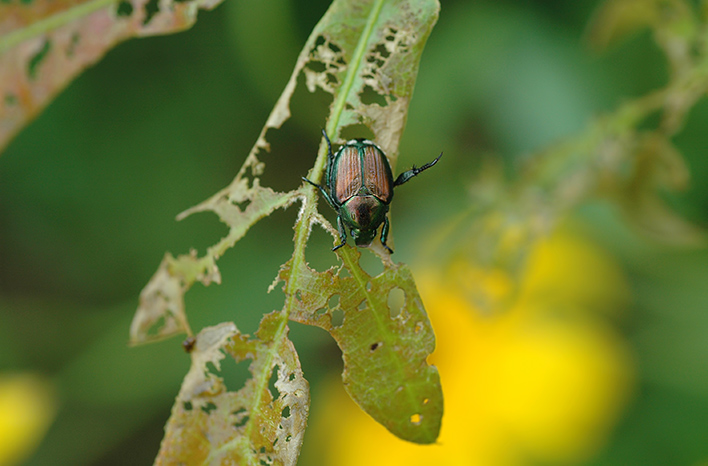 Adult Japanese beetles skeletonize leaves between the veins. The foliage that remains looks similar to lace.

The Japanese beetle has an annual life cycle. The adults do not overwinter, so the beetles chewing on your plants now are less than a year old.

The adults that emerge in summer to feed on leaves are also breeding. The female burrows into the ground or turf many times over the season to lay eggs — up to about 60 by the middle of August.

Japanese beetle eggs hatch less than two weeks after they were laid and the larvae, or grubs, remain underground for the better part of a year. Though grubs may appear immobile, in the fall and spring the grubs are actively feeding on grass roots. Grubs then pupate before emerging two weeks later, in late spring or early summer, as adults. The adults live for just 30 to 45 days on average. 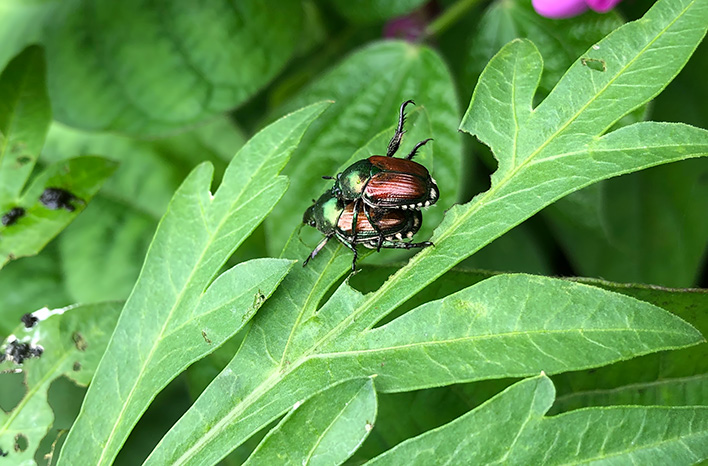 Adults Japanese beetles emerge in summer and breed. The female burrows into the ground or turf many times over the season to lay eggs — up to about 60 by the middle of August.

You can never eliminate Japanese beetles, but you can manage them.

Japanese beetles can fly to your garden from as far as five miles away — though it’s more likely they came a shorter distance. The first to arrive on your plants will release an odor letting others know where they have found food.

Like with any insect problem you encounter, start with the least environmentally impactful control method first, in keeping with the principles of Integrated Pest Management, or IPM. Start at the top of this list and only work your way down if you must:

Trapping is a popular approach to Japanese beetle control that uses yellow bags baited with pheromones and floral scents. These commercial traps are available at home improvement stores and garden centers and are very effective in attracting Japanese beetles — in fact, they are too effective. Multiple studies have found that Japanese beetle traps attract far more beetles than they catch. As a result, the traps can actually draw more beetles to your yard than you had before. For this reason, I don’t recommend this option.

Before you go applying grub control to your lawn, test first to be sure you have a grub problem. The best time to check for grubs is during late summer and late spring, when grubs will be nearest the surface. Pick a few different areas and, in each, cut out a 1-foot-by-1-foot section that is 3 inches deep. Turn over the cutout and inspect the root area and soil for grubs. If you count 10 grubs or more per square, consider treatment.

The most common grub control for lawns is a big bag of granular synthetic insecticide from the garden center or home improvement store. While effective, this type of grub control can be hazardous to wildlife, beneficial insects, the environment and people when used improperly.

A better, safer choice for turf insect suppression is biological controls — namely, bacteria and parasitic nematodes. Biological controls are slower acting but longer lasting, and they can achieve similar results without the risks that traditional control methods pose.

Here is a partial list of some of the most popular biological controls for Japanese beetle grubs:

Listen to the joegardener podcast episode Understanding Nematodes: Microscopic Worms, Friend or Foe of Your Garden with Dr. William Crowe, a professor of entomology and nematology at the University of Florida, to learn more about the benefits and science behind parasitic nematodes as pest control.

Eradication of Japanese beetles is still out of reach, but new methods of control are constantly being evaluated. Until a permanent solution emerges, keep practicing Integrated Pest Management — you’ll find it’s both safe and effective.

Ready to have more of your gardening questions answered? Sign up to receive gardening resources, eBooks and email updates on the joegardener podcast and more. 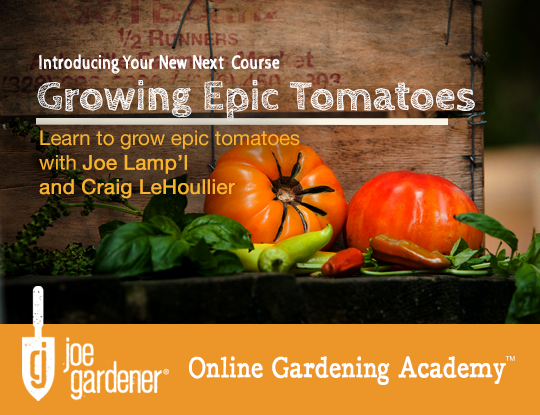